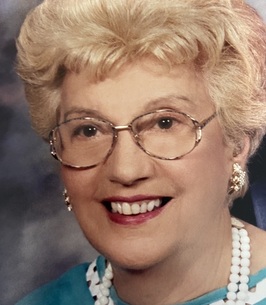 Marie, otherwise known as Mom, Nanny, or Aunt Mary, was born on December 1, 1923, in Mamaroneck, NY, to Michael and Josephine Fraioli. She was the youngest of six children. Her older siblings Celeste, Joseph, Bernita (Bunny), Rocco and Frank were all very close. They often boasted that they never fought, which their children, friends and members of their extended family agreed with. Marie graduated from Mamaroneck HS in 1941.
On September, 28, 1957, she married Joe Isola. They lived in Mamaroneck until retiring to Hilton Head, SC, where they lived for 20 years. In 2009, they moved to CT to be closer to family.
Most of Marie’s professional life was spent as an administrative assistant. She did work for several very well-known personalities. Prior to her marriage, Marie was the personal secretary to movie and theatre writer, director, and producer Elia Kazan. She often told the story of walking down Broadway in NYC holding an Academy Award that Mr. Kazan had won. In addition, Marie also worked for the iconic American author John Steinbeck. Towards the end of her professional career she worked for Academy Award winning director Joseph Mankiewicz. In between working for Mr. Kazan and Mr. Mankiewicz, Marie worked for the Mamaroneck School District, first as the administrative assistant to the principal and finally as the purchasing agent for the district.
What mattered most to Marie was her family - brothers, sisters, cousins, nieces, nephews, her son and daughter-in-law and her grandchildren. They always knew that she was there for them and loved spending time with them. She was quite the cook and was famous for making elaborate birthday cakes. Marie was also the family historian. She chronicled every special event: birthdays, anniversaries, first communions, graduations, weddings and more with her 8 mm, then super 8 mm and finally her video camera. The memories that Marie captured are treasured by multiple generations of her family.
Marie is survived by her son Joe, daughter-in-law Lori, and grandson Austin of Newtown. Her granddaughter, Melanie, lives in Marina del Rey, CA with her husband Chris.
Friends and family may pay their respects at the Honan Funeral Home, 58 Main St., Newtown, CT on Saturday, February 26 between 9:30 - 10:30 am. A Mass of Christian Burial will be celebrated at 11 am at St. Rose of Lima Church in Newtown.
In lieu of flowers, please make a contribution to St. Jude’s Children’s Research Hospital.