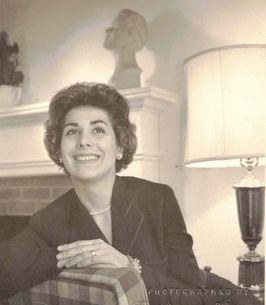 On Thursday, July 14th, 2022, Stella Josephine Spector, loving wife, sister, mother, aunt and grandmother, passed away at the age of 93.

Stella was born on May 8th, 1929, in Melrose Park, IL to Henry and Stella Kuhlmann. As a daughter of a naval officer she would move quite often and spent a number of her childhood years living in Cuba. At the early age of 13, Stella started her modeling career, which went on to include modeling for Pierre Balmain, becoming Miss Connecticut, and participating in the first Miss Universe Pageant in 1952. Stella was represented by the Coronet Model Agency, as well as the Ford Modeling Agency and she also helped start the Models Guild of Philadelphia. Stella worked for the Blum Store in Philadelphia as a model and fashion commentator and this is where she went on to meet her future husband. On October 23rd, 1954, she married Arthur Edward Spector and together they raised five children in Newtown, CT, where she was a long-time resident.

Although she led a glamorous life as a model, Stella’s most cherished titles were mother and grandmother. Stella loved to travel the world with her family and jumped at every opportunity to do so.

Stella was preceded in death by her husband, Art Spector, her sisters Sophia Wiss & Lois Kuhlmann, and her son Henry “Toby” Spector. She is survived by her brother Dietrich (Kaye) Kuhlmann of Denver, Colorado, her children Amy Brettholz of New York, NY, Kathryn (Alban) Miller of Champaign, IL, John “Jeb” (Cheryl) Spector of Woodbury, CT and Annie Sumple of Doylestown, PA & her step-son Victor (Debbie) Spector of Chalfont, PA. She is also survived by her 12 grandchildren, along with many nieces and nephews.